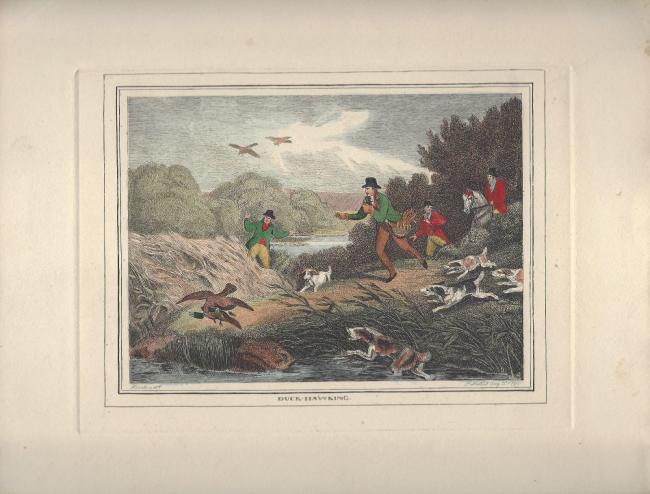 Antique hand colored aquatint print titled Duck Hawking by Samuel Howitt, published Aug. 3, 1799. Plate engraving on wove paper measures 8.25” wide by 6.25” tall at the inset with a margin that is 1.25” along the sides, 1&5/8” along the upper edge and 2” along the lower edge. Total measurement of the entire piece is 11” wide by 10” tall. Print will be shipped flat.

The years 1790-1830 were the great period of colored aquatint illustration and the golden age of colored books in England. Chromolithography was not invented until 1837. In the early decades of color plate books, color was added by hand. Aquatint is the first type of printing used for color plate books. The original artist of the print would produce a template showing the colors that should appear in the plate, and colorists would add the colors based on the template. The addition of colors by hand gives it an effect not seen in other forms of engraving. The early colorists of aquatints were among the first to use bold contrasts and bright tints, a trend which influenced watercolor painting. Many color plate books are significant more for their illustrations than for their texts or literary content. The illustrations are what make these books unique and define them as a genre.

Samuel Howitt (1756/57–1822) was an English painter, illustrator and etcher of animals, hunting, horse-racing and landscape scenes. He worked in both oils and watercolors.

In early life he was financially independent and devoted himself to field sports. However he ran into financial difficulties and was obliged to turn to art as a profession - which up until then he had engaged in as a talented amateur.

Coming to London, he was for a time a drawing master at Samuel Goodenough’s school in Ealing. In 1783, he exhibited 3 colored drawings of hunting subjects with the Incorporated Society of Artists. From time to time he continued to exhibit there and at the Royal Academy, beginning in 1784 with a hunting piece, followed in 1785 by two landscapes.

Howitt worked both in oils and watercolors, for the most part confining himself to sporting subjects and illustrations of natural history. These, as Howitt represented in his New Work of Animals, were “drawn from the life" and published so as to "assist the pencil of the designer who has not had an opportunity to pay the same attention to this branch of the art”. However, notes in one sketchbook containing watercolors of apes and monkeys indicate that, while some there certainly were viewed in private menageries, others were studies of stuffed specimens from William Bullock’s museum and the British Museum.

Howitt was closely associated in his art with Thomas Rowlandson, whose sister he married. His works did, at one time, often pass for those of his brother-in-law; but, unlike Rowlandson, he was a practical sportsman, and his scenes were more accurately composed. He was a clever and industrious etcher, and published a great number of plates similar in character to his drawings, and delicately executed with a fine needle. He also produced a number of caricatures in the manner of Rowlandson.

In 1822 Howitt died in Somers Town, London, and was buried in St. Pancras cemetery.

Aquatint is an intaglio printmaking technique, a variant of etching.

In intaglio printmaking, the artist makes marks on the plate (in the case of aquatint, a copper or zinc plate) that are capable of holding ink. The inked plate is passed through a printing press together with a sheet of paper, resulting in a transfer of the ink to the paper. This can be repeated a number of times, depending on the particular technique.

Like etching, aquatint uses the application of a mordant (dye fixative) to etch into the metal plate. Where the engraving technique uses a needle to make lines that print in black (or whatever color ink is used), aquatint uses powdered rosin to create a tonal effect. The rosin is acid resistant and typically adhered to the plate by controlled heating. The tonal variation is controlled by the level of mordant exposure over large areas, and thus the image is shaped by large sections at a time.