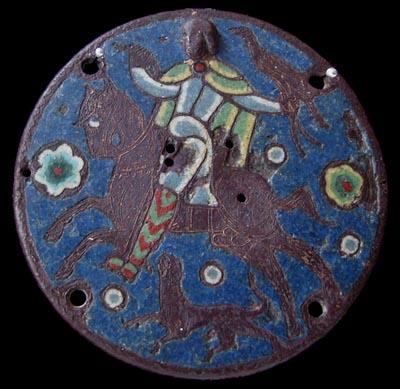 Limoges Champlevé-enamel plaque with a hunter on horseback, a bird of prey and a dog.
This mount can be dated in style to the end of the XII c., around AD 1180-1190.

This plaque is connected to the famous secular enamel casket of the British Museum, and the Louvre mounts of the Comte de Mailly collection - see picture.
These Limoges works are considered as originating from the court of Aquitaine, under the rule of the Plantagenets.

The comparison between our plaque and these works of Limoges is based on both technical, stylistical and scene criteria. The connection with the Mailly
plaques of the Louvre is so convincing that a common workshop origin can be proposed. On the Mailly plaques, animal bodies are decorated with small
engraved dots, a unique feature in Limousin enamels. The same regular decoration is visible on the body of our plaque's horse.
The size of the Mailly medallions, 6,9 cm, is close to our plaque's diameter : 6,8 cm.

There are enough differences, however, to exclude that our plaque belonged to the same casket.

On a technical point of vue, the blue background with rosettes is a sign of a work created after 1175-1180, as is the use of a "classicizing"
head in half relief.
On the other hand, the use of vivid colored enamels to fill the clothes is typical of a 12 c. work, as this technique was not used after 1190.
The presence on the same work of both fully enameled figure and blue background with rosettes makes this work one of the few surviving example of
the intermediary style of the years 1175-1190.

The scene depicted is also important : a secular scene with a hunting knight.

The garments of the hunter show an aristocratic background, in particular the cloak and the pants. The latter are highlighted by alternating red and green
chevrons, which is unique in Limoges works. The hunting dog, as well as the bird of prey, were both privileges of the early medieval aristocracy.
The use of a central red enamel circle to fasten the cloak, perhaps representing a disc brooch is scarce in Limoges work.
Two other examples of a central red enamel disc as a cloak fastener can be found on the Limoges Musée de l'Evêché visitation plaque, dated 1170-1180,
and considered of Eleanor of Aquitaine court provenance, as well as the Louvre Crucifixion book cover plate dated 1180-1190.

The plaque is also important as a early representation of falconry on horseback, which existed for centuries but was meeting new interest in the second part
of the 12 c. Metalwork representation of this sport, highly symbolic of aristocratic power, are very rare. Other known representations of falconers
on horseback in Limoges works include the British Museum secular casket, a privately-held casket in France (known as cardinal Bicchieri casket), and a Limoges
casket of the Aachen Cathedral Treasury, these two being of lower quality.

Secular scenes in early Limoges works are rare. The British Museum enamel casket (1180) and the Louvre plaques (1180-1190) are considered among
the first surviving examples of secular Limoges works.

As a matter of fact, the Limoges workshops, located in the St Martial abbey or under the direct control of the monks, were not commercial workshops.
A secular order would only originate from an authorized person, close to the Abbey or its political patrons, the Plantagenets.

Several smaller holes in the central field are considered as being made to hold half-relief elements, such as for instance a sword, although the presence of a sword
is not sure. The fact that there is no enamel around these holes show without doubt that these areas were covered, but what these missing elements represented
is an open question.

The use of this mount as a secular casket decoration is probable, perhaps explaining the fact that the gilding has nearly completely disappeared. One must say,
however, that some caskets decorated with secular representations were also used for religious needs.

The loss of the original gilding is the main major defect of this Limoges work, along with the missing half-relief appliqués. Otherwise the conservation is superb
as for details and enamels.