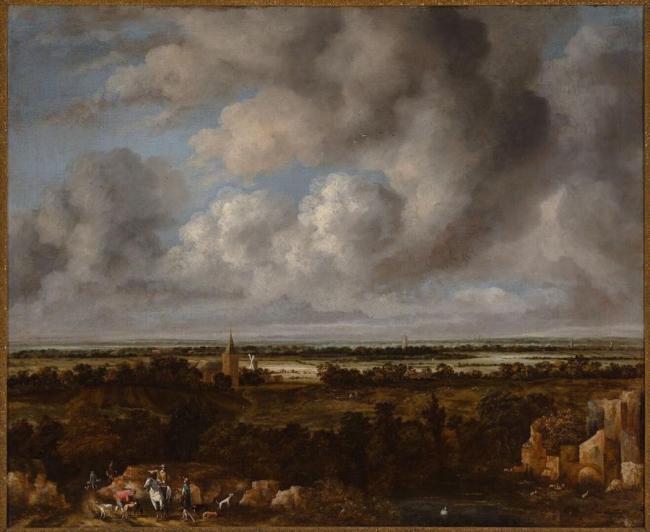 The landscape has a church with a tall spire, and farther in the background a second church with a high tower can be seen. In the foreground to the right, there are the ruins of a castle. The horseman to the left, is a distinguished gentleman, setting of to hunt with the falcons. Next to him, a man with a hunting horn is releasing the dogs. A figure carrying the falcons is walking on the path. In the distance, the landscape stretches out in many horizontal parties. A sky of turbulent clouds acts as a roof to the space. That the landscape should be somewhere in the vicinity of Haarlem, as is generally presumed, has not been confirmed topologically and is probably not correct. This landscape by Jan van Kessel is very similar to the painting by Jacob van Ruisdael, ‘Landscape with castle ruins’, in the National Gallery in London. It has also proved impossible to determine the church that is depicted in this painting dating from 1655-1670, or the location of the landscape. Probably Van Kessel was inspired by Ruisdael’s painting to produce the work in our collection and both works were produced around 1670.